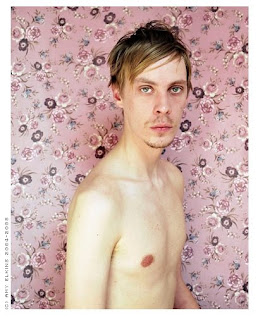 I like the work Wallflower by Californian Photographer Amy Elkins.
Here a note on the project:
Wallflower, an ongoing and evolving series of male portraits, is an exploration into the other. With a strong interest in psychology, I have turned specifically to the psychology of the opposite sex, finding the mannerisms in which significant role models in my personal life reveal endlessly fascinating. It is through the series that I investigate and confront some of the cultural grounds underlying gender, opting to focus on the beauty, sensitivity and vulnerabilities found in a sex that has long been held to masculine expectations and stereotypes.
While majority of the Wallflower portraits are done with the use of floral backdrops, there are instances where I have created similar environments with naturally occurring floral backdrops, playing off of the femininity of the natural world. Such works were done in New Orleans, post-Katrina, with men that were affected by the severity of a hurricane that destroyed vast areas of the city.
Posted by Daniele Mattioli at 1:54 PM