Augenblick, Blog on Photography , Exhibition : In Asia by Susetta Bozzi 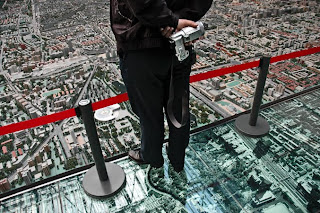 "In Asia" is the title of the exhibition of Italian Photographer Susetta Bozzi which will open today within the 10th edition of AsiaticaFilmMediale (Festival of Video , Movie focusing Asia).
The exhibition is a collection from different reportage around Asia, Susetta is a Beijing-Based Photographer and she travels all over to compile many different features. I wish her a great success for the exhibition!.
Posted by Daniele Mattioli at 8:25 AM 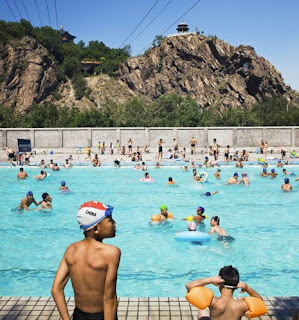 Australian photographer Rodney Evans is presenting his project "Postcard" at the Foundry Gallery here in Shanghai. The project is focusing on the Chinese during their vacation or leisure time .
Posted by Daniele Mattioli at 8:59 AM 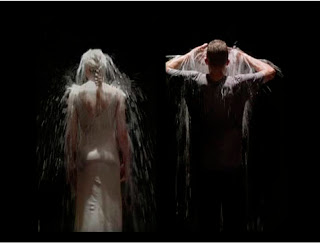 Multimedia artist Bill Viola is presenting his work at the James Cohan Gallery in New York. The exhibition opened on the 23rd of October will showcased his last two decades of work including Pneuma and Ocean without a Shore.
Posted by Daniele Mattioli at 2:00 PM 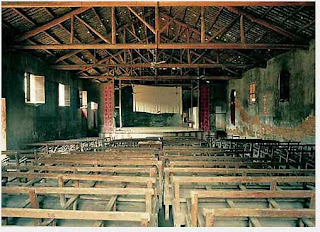 Shao Yinong and Mu Chen have have worked in some interesting photographic projects which , as happen with chinese photographers, is hard to find in the web. Nevertheless the two photographers (a married couple) worked in a very interesting topic which I am happy to talk about in this blog. The Idea of shooting at empty "Assembly Halls" which were spaces and theather used by Communist Party during the Cultural Revolution to "educate" people and remarks the sense of Policy of Mao Zedong. I found the project deep and original.
Posted by Daniele Mattioli at 8:03 AM 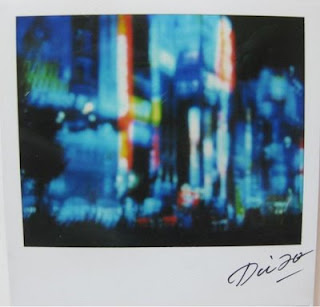 There is a lot of talk about polaroids, perhaps it will be back with a new managment, what we know is that many good photographers have proved the magic of working with this instant film. To give a good example is one of the many books produced by Daido Moriyama which title the sad end of this beautiful media , Bye , Bye Polaroid:
As the title “bye-bye polaroid” suggests, Polaroid has stopped the manufacturing of instant film. The decision comes into force this summer following the growing strength of the digital market and the subsequent decrease in demand for instant film. Moriyama has photographed the city of Tokyo to pay homage to polaroid, a medium he has used unrelentingly for many years. In a style that hasn’t changed for 40 years, he roams the streets, smoking out the sights and smells of the city. Alleyways, advertisement boards, posters, commercial displays, and pedestrians… The Moriyama world you have seen in monochrome, can here be seen in color.
aka Ishii Gallery, Tokyo, 2008. 112 pp., 105 illustrations, 9½x7¼".
Posted by Daniele Mattioli at 8:19 AM 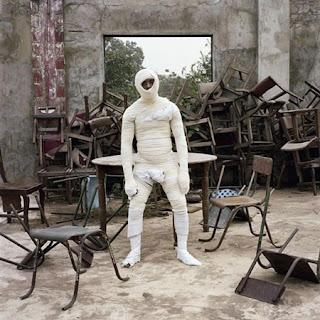 Pieter Hugo is one of my favorite photographer, I came across on his latest work on Nollywood, the Movie industry in Nigeria. Portraits are stunning and great humor. Here the statement on the project written by Federica Angelucci.
Nollywood is said to be the third largest film industry in the world, releasing onto the home video market approximately 1 000 movies each year.
Such abundance is possible since films are realized in conditions that would make most of the western independent directors cringe. Movies are produced and marketed in the space of a week: low cost equipment, very basic scripts, actors cast the day of the shooting, “real life” locations. Despite the improvised production process, they continue to fascinate audiences.
In Africa, Nollywood movies are a rare instance of self-representation in the mass media.
The continent has a rich tradition of story-telling that has been expressed abundantly through oral and written fiction, but has never been conveyed through the mass media before.
Movies tell stories that appeal to and reflect the lives of its public: stars are local actors; plots confront the viewer with familiar situations of romance, comedy, witchcraft, bribery, prostitution. The narrative is overdramatic, deprived of happy endings, tragic. The aesthetic is loud, violent, excessive; nothing is said, everything is shouted.
In his travels through West Africa, Hugo has been intrigued by this distinct style in constructing a fictional world where everyday and unreal elements intertwine.
By asking a team of actors and assistants to recreate Nollywood myths and symbols as if they were on movie sets, Hugo initiated the creation of a verisimilar reality.
His vision of the film industry’s interpretation of the world results in a gallery of hallucinatory and unsettling images.
The tableaux of the series depict situations clearly surreal but that could be real on a set; furthermore, they are rooted in the local symbolic imaginary. The boundaries between documentary and fiction become very fluid, and we are left wondering whether our perceptions of the real world are indeed real.
Words by Federica Angelucci
Posted by Daniele Mattioli at 9:39 AM 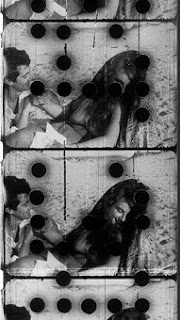 I spoke already on the exhibition on Americans at the Metropolitan in New York but apart from the great event C/O Berlin will introduce the films series from Robert Frank, a retrospective on american daily life and all the contradictions of the
country. Here the presentation of the films series taken from C/O Berlin web site:
In his films, Robert Frank examines the public and private aspects of
American everyday life—the modern odysseys, the familiar
speechlessness, bacchanalian revelries, and sexual freedom—without
pathos, but with a touch of irony. Frankʼs films are unsettling
because they do not draw clear boundaries between genres; biographic,
documentary and fictional elements are seamlessly intertwined.
C/O Berlin .Postfuhramt, Oranienburger Strasse 35/36
Posted by Daniele Mattioli at 8:00 AM

Photographers from all over the world unite ! 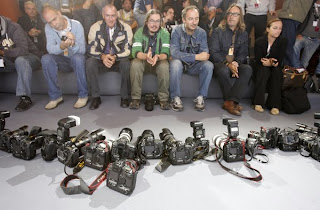 Is funny to see the first time photo of a photographer strike (perhaps they were other strikes and I never see a photo of it ... )... happened in Rome two days ago, the photographers protest at the opening of the Rome Movie Festival, they protest for the thiny space their photocall is given... well I would have hoped that the strikes was done against Flickr or against the many unprofessional people who are working as Photo editor or in marketing giving jobs to networkers rather to photographer... but a strike is a strike and I pay respect for them...
Posted by Daniele Mattioli at 7:20 AM 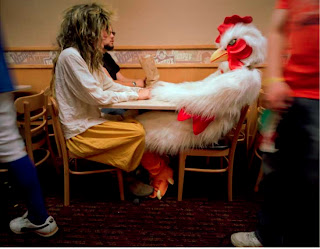 American Photographer Susana Raab will be presenting her work "Consumed" at the Kunslicht Gallery in Shanghai. The opening will be on the 17th of October.
The work focus on the fast food impact on american society.
Posted by Daniele Mattioli at 9:45 AM 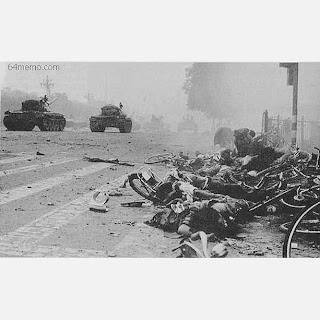 I would normally try not to be political and neither post anything relating to photojournalism but since my blog like many others are blocked in China I am obliged to write about an interesting debate and photo presentation happened in Cagliari (Sardinia) from a dissident writer Ma Jian. Thanks to Italian Newspaper L'Unita' who presented the photo gallery.
Ma Jian , author of "Stick out your tongue" (Small Daily Life stories from Tibet) and Beijing Coma ( a fictional novel based on the Tian An Men riots in 1989), presented some rare images of the Beijing riots where many young students has been killed. The photos taken from Ma Jian (who lives as refugee in London) are few and cruel, show how a country have "eaten" his own children. Students laying on the ground over crossed by tanks and killed to educate the mass. I visited China one year after the riots, Beijing was controlled and tight on the eve of the first anniversary of such atrocity, the ideals were washed out and the brain washing was already started. Nowadays students dream to buy a car, an apartment, watching silly show like in italy or in USA.....
Photography has a deep sense of truth, even when is subjective but is this case is witness of an historical time, many chinese dont know what happened that day in Tian An Men, some who knows never see these photos....
Posted by Daniele Mattioli at 8:22 PM

Exhibition : Robert Frank , The Americans at the Metropolitan 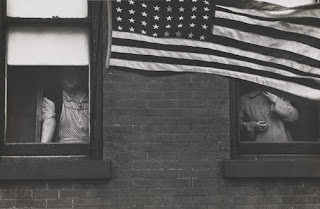 What will be contemporary photography without Robert Frank? The book Americans is the beginning of what we know modern era of fixing a shadow in a film. The Metropolitan Museum Of Art in New York will present a special exhibition by displaying all the original prints from the book, 83 photos that have changed the world of photography. To celebrate the 50th anniversary of the Book which was in the beginning criticized back in 1959. If you happen to be there dont miss the show.
Posted by Daniele Mattioli at 10:02 AM 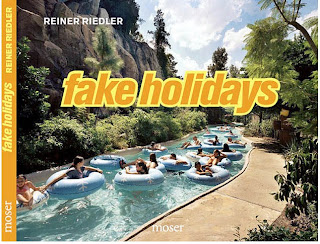 Austrian Photographer Reiner Riedler has presented his latest project launching it as a book called "Fake Holiday". The Book is the result of a documentary work which took him to travel in different part of the world photographing the many artificial way to go holiday.
Here a short essay written by Jens Lindworsky
When wishes are out of reach, simulation is taking over our leisure time and our holidays. Imaginary worlds are created, often under massive technological exertion, in order to offer us experience as reproducible merchandise. Although the quality of these adventures on demand sometimes proves to be rather dubious, the boom does shed light on one thing: the yearnings and dreams underlying people’s daily lives.
Posted by Daniele Mattioli at 8:15 AM Links to this post

Back on Posting but for how long? 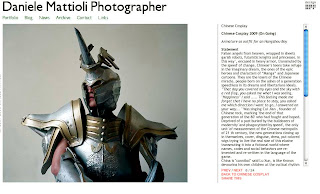 I will be back to post something again in this blog, has been a long time , the Chinese Government has blocked many sites since long time and even many proxy or filters which allowed me to write in this blog. Today I discover a new way to not be seen and it seems work fine but for how long?
In any case i am posting a screenshot taken on my new web site already online since some days. I try to change web site every sometimes, i get bored of my web site easily, also I must confess i get bored of my photos (but in this case I dont know how to replace them...)
I am trying to work more into different directions, less reportage and editorial style more in portraits and more intimate, it is quite hard , perhaps it will take me other few years to reach that, the web site perhaps shows this attempt, early to say but at least I found quite interesting to challenge myself into a different field, understand photography better and see the limitation of photojournalism (what i tried to do in the past). I tried to move on .....
Posted by Daniele Mattioli at 7:25 AM Links to this post