Beaugeste Gallery, perhaps one of the best in Shanghai Scene will introduce a new exhibition of Xu Peiwu’s photo “DRAGONS HORSES SPIRITS and GODS". Here the words of presentation from curator Jean Loh :
“Dragons, Horses, Spirits & Gods, an Alpa diary” is an original photographic essay, in which critically acclaimed urban landscape photographer Xu Peiwu, sought out the invisible and the intangible spirits that have disappeared from our naked eye, amidst the accelerated urbanization of our living environment. Baudelaire’s “Painter of Modern Life” would have agreed with this pursuit of a philosophical imagination that makes the beauty of a modern black & white landscape even more striking and meaningful. 著名城市景观摄影师许培武的“龍，馬，精， 神----阿尔帕日记”是一本超凡的攝影散文，探索今日我们生活环境加快城市化进程中，从我们的肉眼裏消失了的无形精神。 像波德萊爾的“現代生活畫家”， 許培武所追求的哲學想象力， 使一組現代化的黑白風景攝影， 顯示的更引人注目和更有意義。
Opening on the 22nd of May.

Posted by Daniele Mattioli at 9:37 AM Links to this post 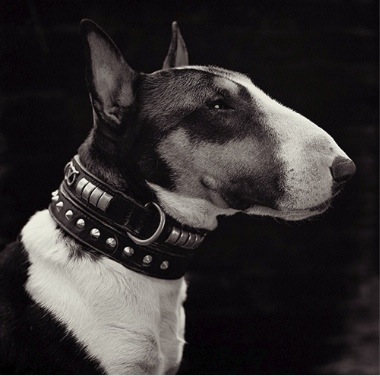 British Photographer Simon Larbalestier has produced interesting fine art work and contributed to many cover of American Alternative Rock band "The Pixies".The work is also exhibited at the Snap Gallery in London until the 29th of May.  Many interesting works from his galleries and also the Pixies Minotaur Limited Edition Box set which combine high quality photos and great design. I choose a portrait of "Spike" , the dog....
Posted by Daniele Mattioli at 12:08 PM Links to this post 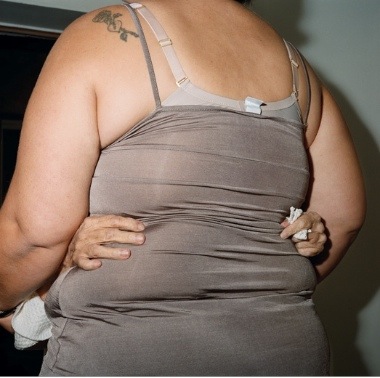 Juliana Beasley will present her new work at Image Singulieres in Séte, France. I am a big fan of Juliana's work and I will prepare an interview with her as soon we will both have time to talk more about her work and and her life which are often linked together. The project is a result of a residency where she has produced great images which ended up in a book called "Juliana Beasley, Séte #10"
The festival will introduce also many other photographers such as Jacob Holdt, Lars Tunbjörk, Chris Anderson and some others.
Here an introduction from the project written by Christian Caujolle :
Juliana Beasley, heir to a tradition of American photography (Arbus or Goldin), is interested in life on the margins. She is currently working in the deprived neighbourhood of Rockaway in New York, documenting a small community of destitute and forgotten whites. Before that, we learned of her through her 2003 book Lap Dance, a real journey into the world of striptease. But here in Sète, Juliana trains her lens on a city and its culture. More than that, she discovers the south itself! It was a journey of adventure for her, not without its challenges, given the divide between old Europe and America today. Her residency resulted in a book, the third in an exciting collection also featuring those by Anders Petersen and Bertrand Meunier. A different kind of book, revealing a different kind of Sète, full of baroque interiors and unusual stories.
13 MAY till 09 JULY Paul-Valéry Museum «Beyond The Walls» salle Tarbouriech
Posted by Daniele Mattioli at 10:33 AM Links to this post 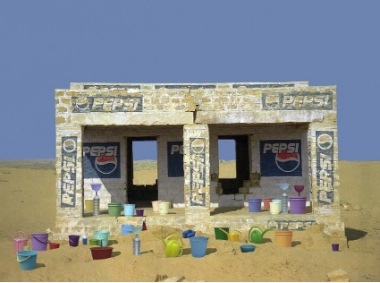 Croatian Dubravka Vidović is an artist ranging from Installation to Photography. She is currently exhibiting at the "Incanto" at the European Photography 2010 in Reggio Emilia (Italy) curated by Elio Grazioli and Gigliola Foschi, presenting her series of photos realized during a travel in India, in Rajasthan, that compose an imaginary landscape where the main element is water and coloured plastic buckets in a hostile sorroundings. She have worked on the images before taking the shots, arranging installations that transfigure the world in a poetic, playful deliberately utopian way. Landscape is not only a objective phenomenon, but a new and personal place.
"She set out the containers directly into the Rajastan landscape, she chose some places, and then arranged plastic buckets to create a figurative composition, and at the same time they become elements of her story about the water. They appear like silent colorfull points among a field surrounded by ruins; they hang like unlikely fruits from a feathery tree in the desert; they invade a half-destroyed shelter, surrounded by the Pespi logo; they take the place of the elements of an old watermill. They seem to wait the rain, or to be brought to a spring to “water”. There is a dry poetry in these pictures that are telling about the essence of life, about its fragility and its hardness. In the care for humility of the things, even the poorest as the more anonimous, Dubravka catches the birth of the shape with a steady hand, to photography and drawn it. Through the living landscapes of the boxed sea and these installations in the nature, the connection with art appears: to represent the real and its invisible relations with the perception, to identify a shape to grasp the experience of the world and its perpetual transformation."
Curator Francesca Pasini for solo show "Boxed Sea" at Gallery Artopia in MilanHere the statement presentation of the exhibition written from curator Gigliola Foschi:
"The images do not deny reality, nor do they remove the pain of it, but they are able to capture things differently in that they are sustained by the need to be fuelled by imagination, hope and engaged attention. In the works of the authors displayed at this exhibit there are no flights towards gratuitous worlds of the imagination. Reality is there, before their eyes, but it is given renewed vibrancy by the affective or imaginary dimension of their way of looking at it. Through extremely diversified visual or design strategies, with the power to effect a kind of sideways shift or displacement of what we normally see, the works become spaces of discovery and enchantment in which reality no longer appears in its “opaqueness”, but opens up to a hidden and evocative dimension instead. Some of the authors have worked on the images before taking the shots, arranging performances or installations that transfigure the world in a poetic, playful or deliberately utopian way. Others use a close up shot or a view dilated in time to transform fragments of reality (a donkey's face, a ship model in a bottle, a simple room, a landscape, an old photograph) into mysterious apparitions or presences suspended in time, stirring the viewer's imagination."

Posted by Daniele Mattioli at 8:58 AM Links to this post 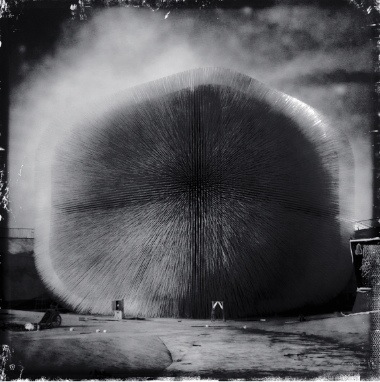 Regina Anzenberger will curate and present the works of 7 different photographers at Bite Magazine . The online magazine formerly called The Blacksnapper is supported by the Dutch Doc (portal for documentary photography of the Fund for Visual Arts, Design and Architecture).
I am honored to be part of the presentation with my essay on the UK Pavilion at Expo done with my iphone (and no photoshop) . Here the Presentation written by Regina Anzenberger on the Project :
A hedgehog in the dark of the night? Photographed in the style of Fritz Lang’s films of the 30ies. Iphone and polaroid makes it possible. A courageous step in direction of finding a new picture language according to new technology and internet standards. Is this the future of photography? Well, I like it. Easy, creative and good looking. Small and pretty fine art works in pinhole optic. Ready to get printed on fine art paper and sold to collectors who like contemporary art.

Posted by Daniele Mattioli at 9:16 AM Links to this post 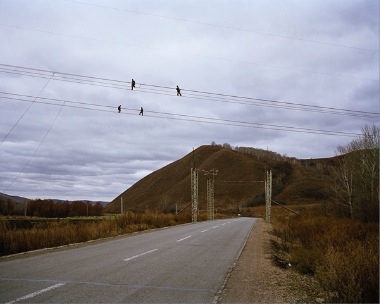 Chinese photographer You Li has produced some good photos of landscape in China. Despite her folio has still no much of a line (no text and no direction somehow) there is a good attempt to look at his own country .
Posted by Daniele Mattioli at 8:36 AM Links to this post 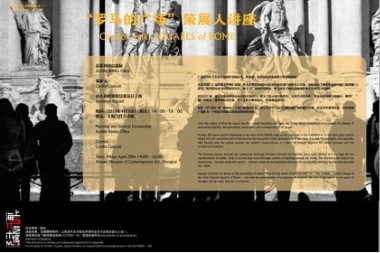 Achille Bonito Oliva together with Cecilia Casorati curated a exhibition called Squares of Rome where different italian photographer were assigned to shoot in different location of the eternal City. Good result and especially interesting to look at Gabriele Basilico or Olivero Barbero among the other here at Moca in Shanghai. Here a note from the curators:
Over the course of time the square has had various functions and signs, yet, it has always maintained as a constant its attitude of welcoming together and generating connections and correspondence of people. In Italy, the square had its beginnings at the start of the Middle Ages as the courtyard to the Cathedral or as the open space placed before the civil authorities and it thus became the barycentre of the development of the cities. It is with Michelangelo, but especially with Bernini, that the square assumes the modern characteristics as a place of relation between the urban structure and the architectural solution. The Baroque square, through the continuous exchange between external and internal, plays upon artifice: it is the stage for the representation of reality, work of art one may move through, symbol of opening towards the world. The fountains, the statues the monuments - located within the square - activate continual and suprising references to one another and they set the seal upon this new vision. Squares of Rome, by means of the placement of twenty large-format works of photographic art - that present a modern image of the most eloquent squares of Rome - and with the same number of sculptures, re-proposes the idea of the square as the space of dialogue and dynamic fulcrum of relations.
Posted by Daniele Mattioli at 7:16 AM Links to this post 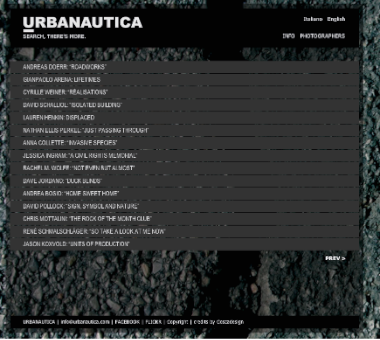 I always keep an eye on Urbanautica, a web zine which display interesting photography, Thanks Steve Bisson for the dedication and commitment . Here some words from him about Urbanautica:
Urbanautica is a research platform centered on photography and the human landscape. A navigation by sight, a trip around the ideas, people and what makes them part of nature and the world. Established through a website with the aim of promoting a critical reflection on “social organization, cities, territories, planet”, the site has already received significant recognition among photographers, magazines, blogs and websites from all over the world. Each month Urbanautica publishs a selection of international photographers who have developed artistic research topics and fine art works that concern landscape, urban transformations, habitat, pollution, abandoned places and our relationship with nature.

Posted by Daniele Mattioli at 8:26 AM Links to this post