Exhibition : Sputnik Photos "At the Border" 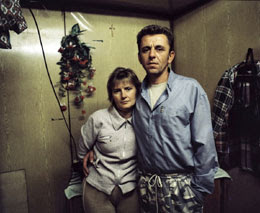 With great pleasure I was invited to curate the photographic section of the World Music Festival of Canti e Discanti, a festival which is held annually in the city of Foligno in Umbria where I was born. The festival has started with the big effort of Piter Foglietta and in the years has became an important appointment for those music lovers . Since last year the festival has switched to photography , I had the pleasure in 2008 to show my work on Cambodia and this year I decided to present the Sputnik Photo project called "At the border".
The Sputnik photo is a collective of different young photographers from the former East countries which developed a feature using different angles.
"At the border" is a photographic essay of 7 different reportages on the Illegal Labour market in the so called "New Europe". More about on the web site http://www.sputnikphotos.com.
Wednesday 8th of July the exhibition will be presented at Palazzo Trinci in the main square of Foligno. I am really sorry not to be there for the opening, I am in China dealing with censorship ( I am writing this post using a filter which slow down my writing and my daily posting)
Posted by Daniele Mattioli at 9:05 PM