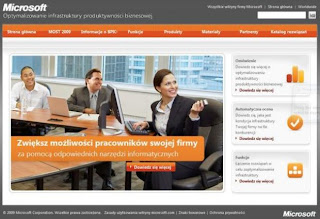 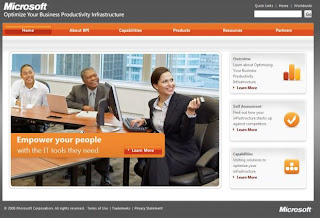 Well i do think that with photoshop things are more easy for many lazy people, photographer does not need to be precise, no need to think, companies no need to hire great photographers and the new category called Photoshopper has a big renovated voice in the industry, they can also get a coffee between one work and the other....
well almost so easy apart some little mistake like this from microsoft where the same campaign has been revisited by changing the face of a black man into a white man... pity they forgot the hand which is still black...
I dont want to start a blog on mistake of photoshop, the blog photoshop disaster (from where I took the photos) does already a great job to show these idiocy but i wanted to post this because it makes me more convinced about the necessity to start to use photography , again, to express idea, selling product, selling concept. Showing a reality rather to invent a bad one...
Posted by Daniele Mattioli at 7:21 AM 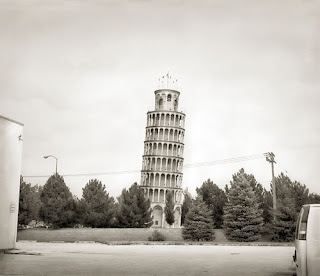 Beth Dow explore the fake buildings in USA, at first glance I thought was a project done in China (as I am used to see many copies of famous building here) but then i read the statement and I was also surprised to see famous landmark spread around America. All in all a great body of work which i advise to have a look. Here the statement :These are the first photographs in a new portfolio that looks at the ways we appropriate and approximate the romance of ruins into modern American environments, and what this says about our longing for historic precedents. While genuine ruins remind us of our own mortality, they also suggest the opposite by showing it's possible to endure, even if only in a reduced and degraded form.We fake antiquities in curious ways, preferring them to spanking-new models. This places the counterfeits at a curious point in time - somewhere between pristine original construction and the present, indicating that we value our nostalgia for something lost over what was actually lost. This circular thinking about authenticity is the biggest draw for me. I have been looking at Victorian photographs by Francis Frith, Felix Bonfils, and Giorgio Sommer, as well as sepia ink and wash drawings by Claude Lorrain, a 17th century artist who used classical ruins to create ideal scenes of pastoral splendor. My pictures of faked antiquities are an attempt to evoke nostalgia for inaccurate history, to wrestle with ideas of authenticity, and to question the value we place on Classical ideals. It is natural to challenge the relevance of nostalgic longing, and I exploit this dynamic in my contemporary landscapes. I approach these pictures as a tourist. These real sites are all shot with a hand-held medium format camera, and include whatever clutter exists around the actual subjects. I also use a slightly wide-angle lens to exploit the sense of disorder through converging verticals. People mill around as they do in Frith's photographs. Life goes on. Unlike the heavily retouched wet-collodion/albumen originals, my film records clouds and other details, so I leave it all in. As my original references are beautiful objects, I honor that beauty by using the Victorian hand-coated platinum process. Platinum is rare, precious, and the most permanent photographic printing medium - an apt metaphor for my search for the authentic and enduring

Posted by Daniele Mattioli at 9:44 AM 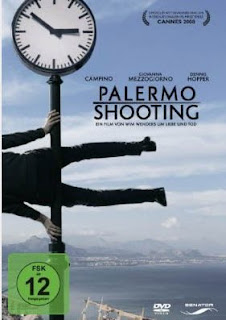 For sure is not a great movie... but is worth to look at it, is a movie which is facing some issues of photography . Worth to see Letizia Battaglia in a small scene with her leica, worth so see the acting of a photographer (well too sexy to look true) with a great camera such as the Plaubel Makina (medium format japanese camera) and worth for a sentence by "Death" Dennis Hopper which appear in the end who tells : Digital Photography is an open invitation to manipulation.... well great sentence , one of the best on digital photography......
Posted by Daniele Mattioli at 10:15 PM

Email ThisBlogThis!Share to TwitterShare to FacebookShare to Pinterest
Labels: Movie

Note from the censorship III : Bansky 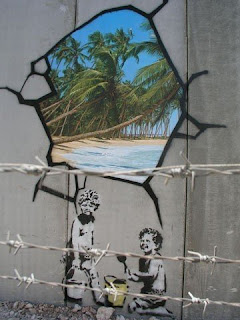 It was not only a break but also a pause to reflect about me working in China, writing a blog on something I like as photography is a pleasure but in general living in China can be the opposite of a pleasure. We are all waiting for this 60th anniversary of "Celebration" of Chinese Government so some censorship can be lifted up, many sites are banned right now, impossible to read interesting blogs, no facebook (well this is perhaps something i do appreciate....) and no other western "Evil" sites like twitter....
there is a sentence i write it down by reading an interesting book called Empire (written by Michael Hardt and Antonio Negri) , the sentence is from Tacitus and is reported at the beginning of the book (well the second part of the sentences but I will write the whole sentence) , Tacitus already describes the idea of what is an Empire : "To ravage, to slaughter, to usurp under false titles, they call empire; and where they make a desert, they call it peace ", I would say that perhaps China did not make a desert but rather a "zone" of modernization such as skyscrapers, metro lines, new shopping mall, highways and so on without facing the improvement of human freedom . Living and believing in modernity and in the same time not allowing people, the few of them (perhaps the 0,004 per cent of chinese population) to express criticism.... is a totally failure for my opinion....
For this post today I will choose an art piece from Bansky, Bansky for me is the artist (or human being) which has more a clear view on the so called "modern Society" we are living on. Sometimes is hard to find a photo which can tell a lot of things within a frame, in this case bansky does the rest.... I will post more about him, many piece of his art can be used to visualize a concept, something that photojournalism , nowadays, does not do anymore.....
Posted by Daniele Mattioli at 7:56 AM Links to this post

Email ThisBlogThis!Share to TwitterShare to FacebookShare to Pinterest
Labels: bansky 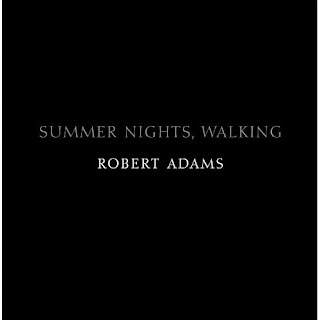 I will have a summer break from this blog, working on some project and waiting for the CHinese government to open again Blogspot (they will ever do?).... but for a while I will stop posting for the August Break. So far since February I have been quite regular in daily posting on what i like and what interesting things coming out from the world of Photography, I have done a forced break in JUne due the censorship of Blogspot here in China until I discover the proxy which allow me to enter and write articles (not without any difficulties....)
I will resume posting after the summer break, meanwhile I will leave you for now with the book from Robert Adams called Summer Nights, walking.
here a note from the publisher:
"In this exquisitely produced book, the influential American photographer Robert Adams revisits the classic collection of nocturnal landscapes that he began making in the mid-1970s near his former home in Longmont, Colorado. Originally published by Aperture in 1985 as Summer Nights, this new edition has been carefully reedited and resequenced by the photographer, who has added 39 previously unpublished images. Illuminated by moonlight and streetlamp, the houses, roads, sidewalks and fields in Summer Nights,Walking retain the wonder and stillness of the original edition, while adopting the artist’s intention of a dreamy fluidity, befitting his nighttime perambulations. The extraordinary care taken with the new reproductions also registers Adams’ attention to the subtleties of the night, and conveys his appeal to look again at places we might have dismissed as uninteresting. Adams observes,“What attracted me to the subjects at a new hour was the discovery then of a neglected peace.”
Aperture/Yale University Art Galler, New York, 2009. 84 pp., 70 tritone illustrations, 8¾x8½".
Posted by Daniele Mattioli at 1:26 AM 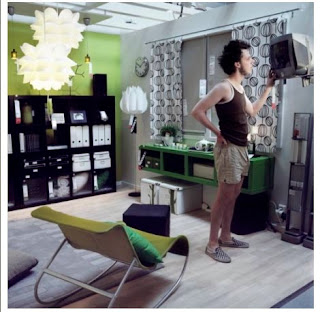 I am a big fan of Ikea , expecially in China where is possible to see people sleeping and using the famous home decoration store as a place to meet up and relax . At the festival of photography of Lodz in Polonia Katerina Drzkova and Barbora Kleinhamplova presented a project done inside Ikea....here a note of the project :In Ikea, you can take a seat or lie back wherever you like and try every product thoroughly. Our assistants will neither disturb you nor drive you off. But if you need assistance, do not hesitate to ask. They will be pleased to help you.

Posted by Daniele Mattioli at 8:18 AM 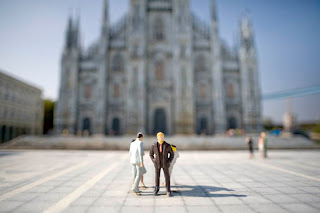 Stefano Giogli worked in some project in the past two years following one of the best workshop called Reflections International Masterclass curated by Giorgia Fiorio and Gabriel Bauret. The masterclass is a interesting group of photographers meeting up every 4 motnhs and discuss topics to be "translated" into photography. Another good thing of the masterclass is that is free.... unless of the many expensice and lucrative workshops around these days.
I have met Stefano in Italy in June and I got a good understanding of the good intent of the Reflextion masterclass.
I have post a photo from the project where Stefano Giogli has done on the Amusement park "italian in Miniatura".
Posted by Daniele Mattioli at 1:19 AM 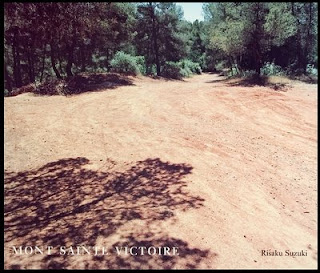 Is not an easy book to look at it but is worth to be mentioned as perhaps an interesting photo project : Mont Sainte Victorie by Japanese Photographer RIsaku Suzuki
Here an introduction note from the publisher :
"Featured in over fifty paintings by Cézanne, the Mont Sainte Victoire in Southern France is familiar even to those who have never been there. A century later, photographer Risaku Suzuki has followed in the great artist's footsteps, using a quite different medium to depict the landscape on the way. In Suzuki's photographs there is a feeling of movement and progression, giving the journey a pace that ought to be at odds with a series of static images. Sometimes it is as if the camera has legs and a mind of its own as it strays from the path to take in just one more inconspicuous part of the environment ? and all the while the audience is beckoned to come along too. Using limited depth of field, Suzuki focuses the lens on a tree, a piece of rock, unexceptional segments of a remarkable climb upwards.
Risaku Suzuki is one of Japan's most prominent young photographers. His work has been widely published in Japan, and exhibited in Asia, Europe and the United States. His photographs were included in "The History of Japanese Photography" exhibition at the Museum of Fine Arts, Houston. He is a past winner of the Kimura Ihee Award. This beautifully produced, oversized monograph is limited to 1,000 casebound copies. Essay by Hideki Maeda." (Nazraeli)
Posted by Daniele Mattioli at 1:15 PM 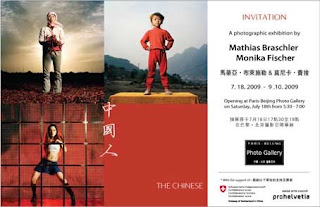 Even if Chinese dont look so glamourous or so well posed with impressive light as in a fashion shot... the exhibition at Paris-Beijing Photo Gallery has a particular planned point of view on Chinese, the two photographer Mathias Braschler and Monika Fisher travelled and worked all over china to produce perfect (too perfect... ) portraits of people from different layers of Chinese Society.
Posted by Daniele Mattioli at 1:08 PM Links to this post