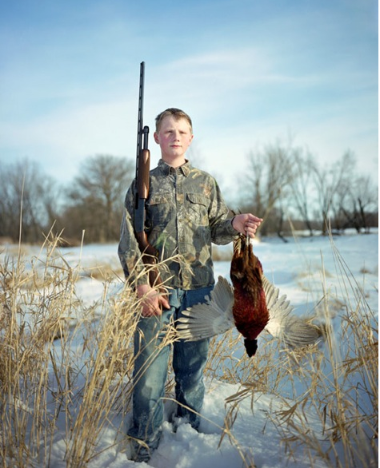 "Young blood" is a great project based on portraits done by American Erika Larsen .The photo described young hunters in America.

Posted by Daniele Mattioli at 5:42 PM 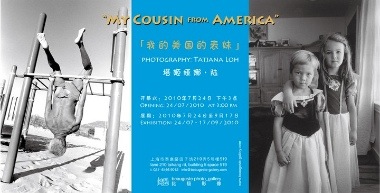 "My Cousing fom America" is a series from Tatjana Loh which will be presented at the Beaugeste Gallery managed and curated by Jean Loh. Opening on the 24th of July from 3Pm

Posted by Daniele Mattioli at 9:00 PM

Email ThisBlogThis!Share to TwitterShare to FacebookShare to Pinterest
Labels: Exhibitions 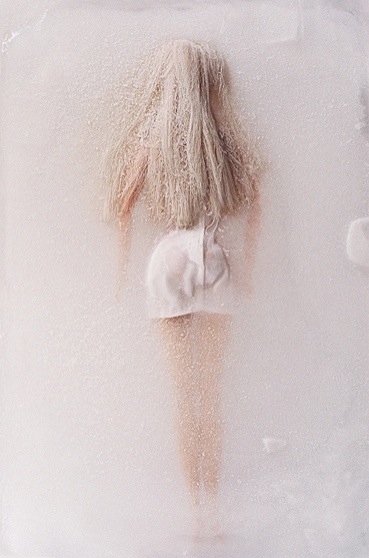 Brasilian photographer André França has developed a series called "Vanishing" in which he explore the disappearing beauty using dolls.I found it quite interesting , here some notes from the  statement written by Alejandra Hernandez Munoz:
To vanish means to disappear, to undergo a process of decaying or finishing. At first, I thought about what could promote or accelerate the corrosion or disintegration of a body: incineration, caustic lime, acid, bacteria, worms. But the bodies, immersed in a liquid texture, do not display any traces of chemical action or deterioration of matter. Therefore, the title of the work made me think of a brand of soap powder well known in Brazil, which promises in its ads to“eliminate all stains, even the most resistant, and make your clothes whiter than the brand most people buy.” In his sense, the series may be regarded as another artistic contribution to what I call “pop lineage of domestic hygiene”, founded in 1924 by Davis with Odol, made big in 1964 with Warhol’s boxes ofBrillo, and currently trivialized with the giveaway cans of Omo designed by Romero Britto. Nonetheless, differently from Odol or Brillo, here not only we see the image of the product Vanish, which could have produced the foam we see in the pictures, but the action is in present continuous tense, vanishing, a progressive, still uncompleted action supported by a narrative sequence of images of objects in a foamy medium.
Posted by Daniele Mattioli at 2:00 PM 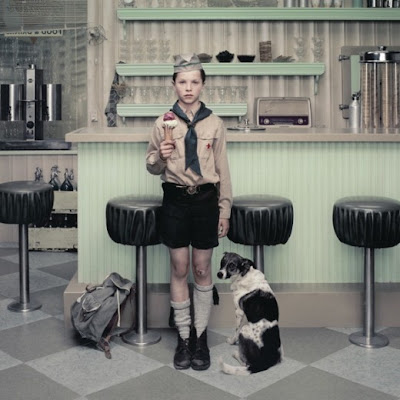 There are few fashion photographers I like to watch, although i do accept their inevitable usage of photoshop as part of a culture and idea of photography.
Milan celebrate one of the few I like , Erwin Olaf, at Forma , until the 21st of September is possible to admire some interesting photographs. Not to miss.
Posted by Daniele Mattioli at 12:22 AM 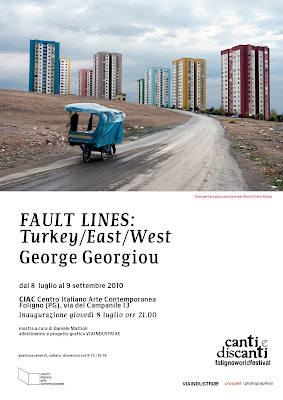 I am also happy to introduce George Georgiou which accept to present his work "Fault Lines : Turkey/East/West  along with the work of Vanessa Winship to exhibit at the CIAC museum in Foligno as part of the program of Canti&Discanti festival . The two exhibition will be opened on Thursday the 8th of July at 9PM. Here an introduction of the project :
Turkey is a strategically important nation, poised geographically and symbolically between Europe and Asia and is seen as the country that will bridge the gap between East and West.
But Turkey itself is at a crossroads, a crossroads that will define it’s very future. British photographer George Georgiou  spent 5 years living in Turkey. Travelling across the country, Georgiou’s photographs explore and question the concept of  East/West, the meaning and consequences of modernity and the many complex and contradictory fault lines at play in contemporary Turkey.
Posted by Daniele Mattioli at 5:40 AM I am happy to present Vanessa Winship exhibition "Sweet Nothing" as part of the program of Canti&Discanti world festival in Foligno . I was asked by the organization of the festival to curate photo exhibition with the topic of Turkey and therefore I was pleased that Vanessa accepted to be exhibited. The exhibition will start with an opening at the CIAC Museum in Foligno on thursday 8th of July at 9.30PM
here some note from the series "Sweet Nothing" :
Until very recently many girls in these remote parts never stepped over the doorstep of a school playground. Attitudes about sending girls to schools is a complex mix of reasons, with traditional values being part of that compexity.
Increasingly conscious of this situation, the Turkish government and several other organisations launched a series of campaigns to get more girls into schools.Slowly the numbers of girls enrolling into the schools rose.
I wanted to make a series of portraits these girls on the borderlands. Knowing their status I wanted to give a small space for the girls to have a small moment of importance in front of a camera.
I decided to use this slower, formal way of making the pictures to create this space. Every frame was made at the same distance to ensure a kind of equality to each girl.I hoped symbol of the uniform, the distance in repetition, and the austerity of the landscape would represent one thing, but I also hoped more than anything, in the expressions of the girls faces, to draw attention to the idea of these young girls poised at the moment “just before”. The moment where possibility lies, a time where the presentation of self  teeters into consciousness. I asked the group of girls to come forward with their chosen friends or with their sisters. Occasionally they come forward alone. Sometimes I asked to make another frame of an individual girl. The girls were a mix of emotions about this event, this small moment of theatre in front of them. They were excited and curious all at the same time. Many things touched me during the making of these images. I was touched by the gravity in their demeanour at the moment in front of the camera, their fragility, their simplicity, their grace, their closeness to one another, but most of all I was struck by their complete lack of posturing and their complete innocence.
Posted by Daniele Mattioli at 10:34 PM


Interesting look into modern China by different artists. "New Photography from China" edited by Wu Hung and Christopher Philipps explore the different aspect of Photography also through interesting statements from artist such as Al Weiwel, An Hong, Bai Yilou, Cao Fei and others.
Here a note from Wu Hung
"During the past twenty-five years, Chinese artists have reinvented photography as a art form. Before 1979, and especially during the Cutural Revolution mobilized by Mao Zedong to reinvigorate Communism in China between 1966 and 1976, publications and exhibitions of photographs served strict propagandist purposes; unofficial photography remained private. The apperances of the first unofficial photo club and exhivition in Beijing in 1979 changed this situation fundamentally. Since then, many such clubs have been organized by independent curatiors and artists. In the process, contemporary Chinese artists' use of the medium has evolved from imitating Western styles to developing an original language and character."
Posted by Daniele Mattioli at 9:12 AM