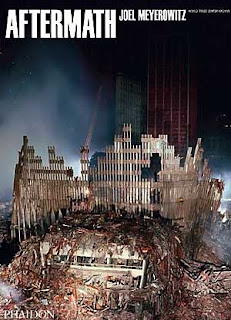 I was thinking about the 9/11, what happened was an historical moment in American History, the reflections started from the fact that something similar happened in Beijing when of the new building of the CCTV tower complex burned due a Chinese New Year's fireworks, the building burned almost all night but it did not melt down as the twin tower.... is perhaps the explosive theory visible in the documentary Loose Change was really true?
Nevertheless New York photographer Joel Meyerowitz worked a lot on the aftermath and produce a book on it. here some note from the publisher:
After September 11th, 2001, the Ground Zero site in New York City was classified as a crime scene and only those directly involved in the recovery efforts were allowed inside. The press was also prohibited from the site, but with the help of the Museum of the City of New York and sympathetic city officials, award-winning photographer Joel Meyerowitz managed to obtain unlimited access. By ingenuity and sheer determination, he was the only photographer granted unimpeded right of entry into Ground Zero.
For 9 months, during the day and night, Meyerowitz photographed "the pile," as the World Trade Center came to be known, and the over 800 people a day that were working in it. Influenced by Walker Evans and Dorothea Lange's work for the Farm Security Administration during the Great Depression, he knew that if he didn't make a photographic record of the unprecedented recovery efforts, "there would be no history."
Published by Phaidon Press. Hardcover edition, 2006
Posted by Daniele Mattioli at 12:46 AM