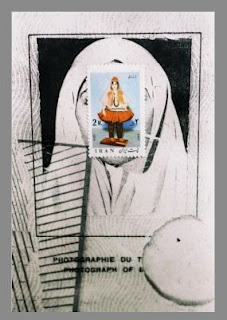 Another interesting photographer from Iran : Hamila Vakili, again another female artist which has worked in some concept topics, I personally like the series from Stamps from which I choice the photo of this post's cover.
Hamila Vakili was born in 1979 in Tehran where now she lives. She graduated with a B.A. in Photography from the University of Tehran. Between 2001 and 2007 she has exhibited both in Iran and abroad, including the exhibitions '30 years of Solitude' at Cambridge University and the 'The veiled Mirror' at the De Santos Gallery, Houston, Texas. She also took part in 'Ey Iran', an exhibition of contemporary Iranian photography at the Gold Coast city Art Gallery, Australia. The Silk Road Gallery presented her works in 2004 at Paris Photo, Carrousel du Louvre, Paris and in 2007 at Art Paris, Grand Palais, Paris.
Posted by Daniele Mattioli at 8:18 AM