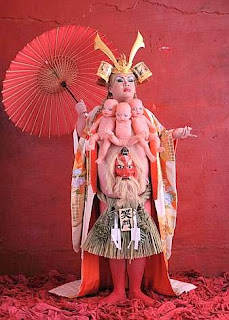 Daikichi Amano has presented for the first time in Europe (in Rome) his show "Human Nature". The work follow and develop the well knows Erotic photography of Japan. I found interesting some of his work although he has a strong influence from the "Post Production" idea. The exhibition was held at Mondo Bizzarro Gallery in Rome.
here some notes from the show:
Daikichi Amano likes to describe himself as the “modern day reincarnation of Katsuhika Hokusai”. This is not an empty boast. Amano is one of the most exciting new visual artists working in Japan today.
Amano’s regular appearances in UK magazine Bizarre (the leading magazine of alternative culture), who have featured his photographs and work prominently in every issue for the past two years, have won him a worldwide cult following, with many fans in Europe, USA, Latin America and Australia.
Amano’s photographs are drawn from his own private fantasies. Fantasies that are animistic, animalistic and atavistic in nature, but all-too-human in execution, evoking primal fears and desires. In Amano’s world, the human body is worshipped and admired for its awesome beauty but also deformed and fused with nature – with wood, blood, bones, scales and feathers – transforming it into an erotic grotesque. But these frightful dioramas are also cut through with the blackest humour. His images also draw from traditional Japanese iconography and mythology.
Posted by Daniele Mattioli at 6:24 PM