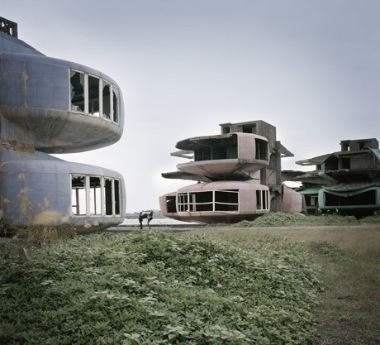 Thanks to CreativeTourism.com to let me talk about Stanley Wong essay called "Unfinished Business". Is a project I saw some time ago and that I wanted to talk but the article from Kate Feld explained it more carefully.
here some note from Kate Feld:
In the late nineties, artist Stanley Wong often stayed in a hotel in Guangzhou whose rooms offered an unusual view: it was right next to a tall building that had been abandoned just weeks before completion. Whenever he stayed there, Wong would find himself staring out of the window, admiring its stark, postmodern lines and wondering what had happened. Over the next few years, as the country’s economy slowed and the frenzied property market began to collapse, Wong started to see more of these abandoned building projects in China. They became known as lan wei – decaying ends, buildings inexplicably aborted before completion, their owners overextended or mired in shady business dealings. In Hainan alone, some 16.3 million square meters of building space was left unfinished in 1998. And as the bust spread out across Asia, so did thelan wei. They seemed to say something compelling about society, so Wong began a project focused around them. He started with the building that had noticed first, photographing it and trying to uncover its full story.
Posted by Daniele Mattioli at 7:23 AM