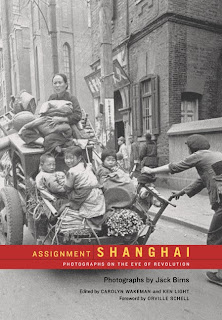 My friend Rosa Chen, photographer and great help for my current project on Cosplay series has brought me to look at a interesting book from Life Magazine's photographer Jack Birns called "Assignment Shanghai", I have to be honest I did know his name and I cannot find much from him in the net. The book shows the City of Shanghai in the eve of the Revolution which took Mao Zedong in power and he witnessed the terrible years of the civil war . The photos were done with a Rolleiflex depicting the end of the golden days of the Chinese metropole. The book was published in 2003 and it is an important document for Shanghai history.

Jack Birns worked one year in China at the age of 28 and he has done many assignment for Life Magazine. He died in 2008

Posted by Daniele Mattioli at 8:07 AM