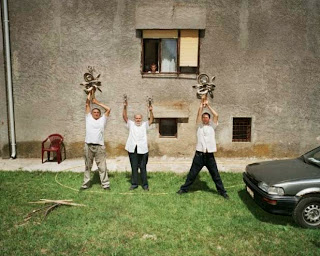 I like editorial photography when can tell something new and open my mind to a different world, is the case of Lars Tunbjork which has faced an interesting story on Radovan Karadzic second life.Better to read the presentation from the reportage and understand the incredible funny series ( I have choose the most funny one people holding strange antenna to defend themselves from magnetic fields...)
On the run for 12 years, Rodovan Karadzic lived using the fake identity of Dragan Dabic, natural medicine specialist, when he was arrested in Belgrade on the July 22nd 2008.The former chief of Bosnia's Serbian people is accused of war crimes, crimes against humanity and genocide.At the time of his arrest, Dragan Dabic was quickly becoming somewhat of a celebrity in Belgrade: he had his own column in a national magazine and he was collaborating with a well-known sexologist on a novel form of sperm-rejuvenation therapy.
Lars Tunbjork went to Belgrade and photographed those who met with him during these 12 years. From a nationalist bar keeper to followers of alternative medicine, they are numerous to mention the unusual magnetism of “Doctor” Dabic.
This new life was stopped dead in its tracks as Karadzic was sent off to The Hague last July to stand trial for war crimes.
Posted by Daniele Mattioli at 9:00 AM